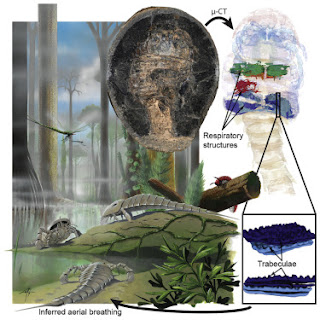 From the abstract: "Arachnids are the second most successful terrestrial animal group after insects and were one of the first arthropod clades to successfully invade land. Fossil evidence for this transition is limited, with the majority of arachnid clades first appearing in the terrestrial fossil record. Furthermore, molecular clock dating has suggested a Cambrian-Ordovician terrestrialization event for arachnids, some 60 Ma before their first fossils in the Silurian, although these estimates assume that arachnids evolved from a fully aquatic ancestor. ... Here, we present details of the respiratory organs of Adelophthalmus pyrrhae sp. nov. from the Carboniferous of Montagne Noire, France, revealed through micro computed tomography (m-CT) imaging. ... The discovery of air-breathing structures in eurypterids indicates that characters permitting terrestrialization accrued in the arachnid stem lineage and suggests the Cambrian-Ordovician ancestor of arachnids would also have been semi-terrestrial."  Published by Cell Press, online at Elsevier's ScienceDirect.com.
Full-text available in the OhioLINK Electronic Journal Center, for those at OhioLINK libraries.
Posted by Alison Ricker at 1:56 PM