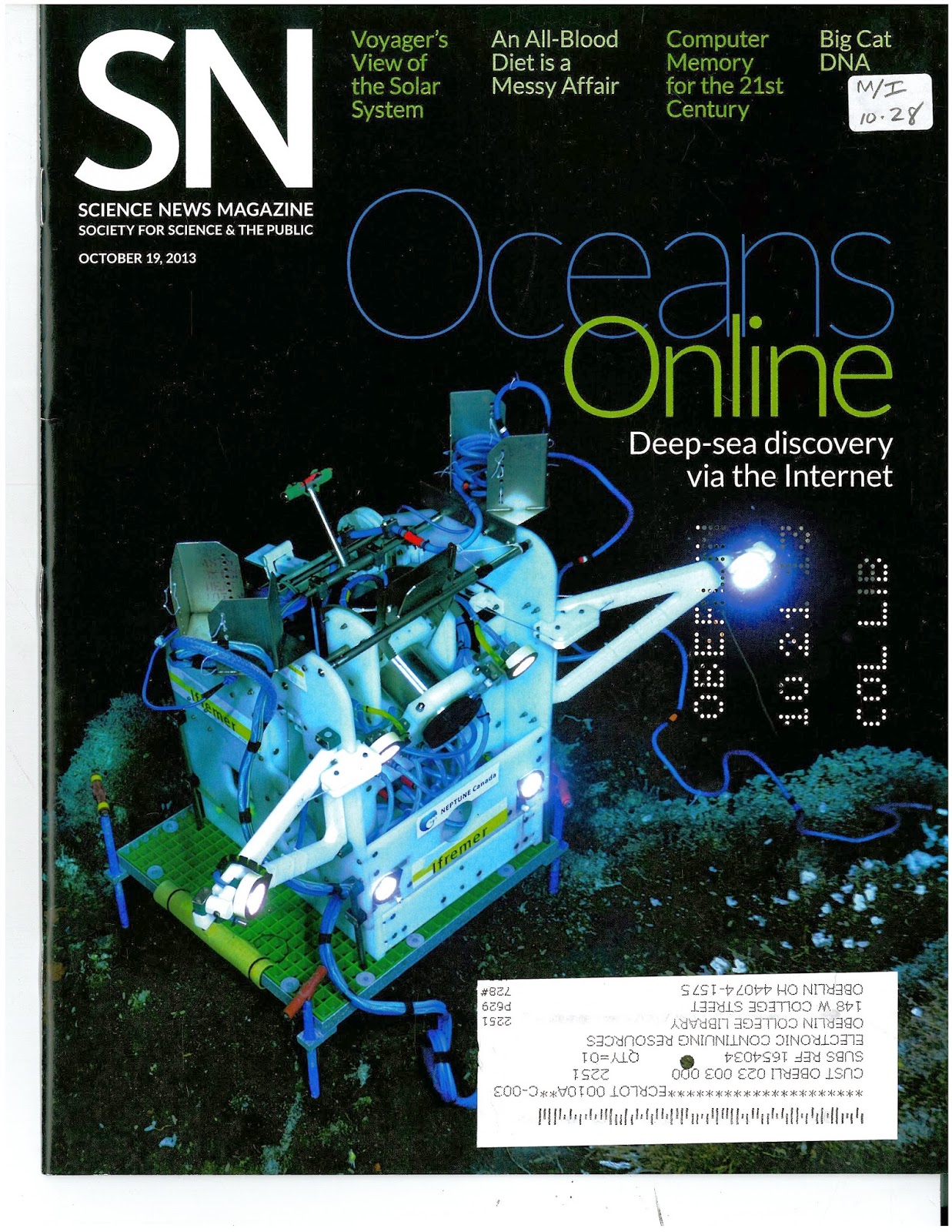 Science News, Oct. 19, 2013:  Real time monitoring of the seafloor in six underwater research stations connected to the Internet with fiber optic cables - this is the NEPTUNE observatory (Canada site).  Science News describes an amazingly broad research study of the biological, chemical, physical, geological and acoustical features of the ocean floor, including deployment of a robot named Wally that monitors methane bubbling up from a seafloor canyon more than 850 meters deep.  This issue is on the current reading rack now, adjacent to the circulation desk.  Stop in and read more: the potential for massive tsunamis if too much methane is released all at once, due to warming waters or a change in pressure; video footage of a northern elephant seal slurping up a hagfish in one gulp; seismometer recordings of both whale songs and an earthquake; the vitality and dynamism of ocean ridges.  The NEPTUNE observatory involves scientists around the world and its "online viewing portal" may be accessed by anyone. See Interactive Oceans at Univ. of Washington (NEPTUNE U.S.).
.
Posted by Alison Ricker at 11:34 AM No comments:

"mostly our cities are a herp's worst nightmare" - John Marzluff 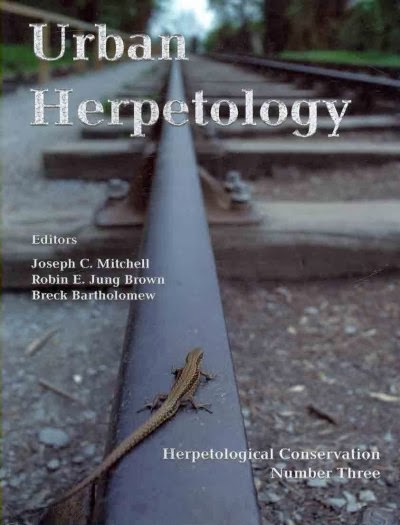 "This is what we are doing to the animals around us: we are pushing them out, running them over, isolating their populations, changing their sex, modifying their genes, making them mini-toxic waste sites, turning them into freaks, suppressing their immunity, changing their night into day, and stacking the deck in favor of non-native invasives." -- from Urban herpetology / edited by Joseph C. Mitchell, Robin E. Jung Brown, and Breck Bartholomew.  Forward by John M. Marzluff.

Over 100 authors, 40 chapters of research studies across most continents, 13 case studies and countless cited references make this a formidable tome: an urgent plea for conservation and a recognition that biological diversity and reasoned co-existence of humans with other species just as essential for a healthy urban environment as it is for a wilderness preserve.  On the new book shelf.
Posted by Alison Ricker at 2:21 PM No comments:

Thanks to donations from professor of geology Bruce Simonson, we have a very interesting array of books in the new book corner.  They represent just a few of the many overflowing boxes of  donated volumes that Bruce has carried into the library over the past several years, and they reflect a wide area of research and general interests.  From deep ocean life to objects in space, from mining astroids to deceitful practices of mining on earth, and solving the riddle of navigation for sea-going vessels (Edmond Halley's doing), these donations expand our collection in new directions. Fun and interesting reading, here!  See the new books list.
Posted by Alison Ricker at 11:10 AM No comments:

The American Institute of Physics' Inside Science [written by Chris Gorski] does a wonderful job of explaining the significance of the work that led three scientists who collaborated in the United States to share in the 2013 Nobel Prize for Chemistry.

I also liked Richard Harris' analogy, heard on NPR's Morning Edition, of a "chocolate and peanut butter" combination, to explain how blending quantum mechanics and "ball and stick type models" (i.e., classical mechanics) of chemistry have led to a transformation in our understanding of chemical reactions.
Posted by Alison Ricker at 3:47 PM No comments:

Yesterday's announcement of the 2013 Nobel Prize for Physiology or Medicine to James E. Rothman, Randy W. Schekman and Thomas C. Südhof "for their discoveries of machinery regulating vesicle traffic, a major transport system in our cells," may have left you wondering what sort of machine is inside your cells.  The Nobel Prize press release explains it quite nicely: "Each cell is a factory that produces and exports molecules. For instance, insulin is manufactured and released into the blood and chemical signals called neurotransmitters are sent from one nerve cell to another. These molecules are transported around the cell in small packages called vesicles."  I especially appreciate the analogy to a busy port, with the challenges of traffic congestion, docking and timing handled by genes encoding specialized proteins and the aid of highly targeted neurotransmitters.  Incredible activity taking place inside us, every nanosecond!  It is worth noting that Schekman, a professor in the department of molecular and cellular medicine at the University of California at Berkeley, is editor in chief of eLife, an open-access, scientist-driven journal founded in 2011. Read more at Chronicle of Higher Education.

The work of the physicists lauded today, François Englert and Peter W. Higgs, is more familiar to the lay reader, given popular media attention to the Higgs boson.  Nobel Prize in Physics press release:  "for the theoretical discovery of a mechanism that contributes to our understanding of the origin of mass of subatomic particles, and which recently was confirmed through the discovery of the predicted fundamental particle, by the ATLAS and CMS experiments at CERN's Large Hadron Collider."  Check out this book for some broader context: The infinity puzzle : quantum field theory and the hunt for an orderly universe / Frank Close.

Posted by Alison Ricker at 10:48 AM No comments:

Peer review - gotta have it, open access or not

John Buhannon, visiting journalist at Harvard and contributing correspondent for Science, conducted a fascinating "sting" operation by submitting a bogus scientific manuscript describing fictional cancer-related research to hundreds of open access journals.  The results were both disturbing and enlightening: more than 150 journals accepted his manuscript for publication, despite significant errors in methodology and data representation that any scientist knowledgable in the field would have spotted within minutes.  Buhannon summarized his findings in an interview with Renee Montagne of NPR this morning.  The implications for lack of peer review are obvious, as is Buhannon's appreciation for open access journals that rejected his manuscript, thanks to effective reviewers and editors at those publications.  Now to help students understand and appreciate that piece of the scholarly communication process, and able to determine the extent of peer review backing any article published online.
Listen to Morning Edition.  Read the paper at Science (an open access article - thanks, Science!).

This week's delivery of new books features so many enchanting volumes, full of lovely photographs with text that elucidates and expands our ways of knowing.

Feeling Beauty: the neuroscience of aesthetic experience, sets the theme. It's the only book we have classified in NX (you'll find nearly all of the NX books in the art library).  It's rather exotic for the science library, with illustrations of both art and music in the center section - how cool is that?

Over the Rivers and Over the Mountains offer gorgeous representations of landscapes with the turn of every page.  The beauty of our world is both stark and sensuous in these volumes; full of lush forested floodplains, jagged peaks, sinuous streams, and steep cliffs.

Rare: portraits of America's endangered species will inspire you to learn more about these finely photographed plants and animals.  From the Delhi Sands flower-loving fly to the largest mammal, it is a book of exquisite beauty and urgency, to live our lives in such a manner that all fellow creatures are also able to thrive.

Many other new books await your viewing pleasure!  Visit the new book corner for some visual delights.  These pictures really are worth thousands of words.  go to: New book list.
Posted by Alison Ricker at 1:38 PM No comments:

The Pittsburgh Post Gazette reported yesterday that Alcoa kicked off its 125th Anniversary, observing Oct. 1, 1888 as the founding of the Pittsburgh Reduction Company, "after Mr. Hunt and a handful of other steel executives bought the rights to Mr. Hall's patent for a low-cost way to smelt aluminum. Mr. Hall had made the discovery two years earlier."

Charles Martin Hall made that discovery in the woodshed behind his family's home on East College Street, as every Oberlin student should know, with the encouragement and guidance of Oberlin College chemistry professor Frank Fanning Jewett.  Emeritus Professor Norman C. Craig tells an inspiring story of the race to discover what ultimately was called the Hall-Heroult process:

Oberlin celebrated Hall's discovery in 2011.  In a private email message today to the Administrative and Professional Staff Council, a retired member of the Alcoa company pointed out that the legacy of C.M. Hall to Oberlin was dependent upon the establishment of the Pittsburgh Reduction Company, which ultimately led to today's Alcoa.  Oberlinians are very grateful for the inventive genius and philanthropy of Charles Martin Hall, and to the industrialization that made his process so successful.

Posted by Alison Ricker at 11:32 PM No comments: