From the American Association for the Advancement of Science:


On 5 November, 1965, the group now known as the President’s Council of Advisors on Science and Technology (PCAST) cautioned President Lyndon B. Johnson that continued accumulation of atmospheric carbon dioxide resulting from fossil-fuel burning would “almost certainly cause significant changes” and “could be deleterious from the point of view of human beings.”

AAAS observes that fifty years later, "the reality of human-caused climate change has been reaffirmed by virtually every leading scientific organization as well as the vast majority of individual climate scientists worldwide."  The public is invited to participate in a free day-long scientific symposium to commemorate the 50th Anniversary of the First Official Climate-Change Warning to a U.S. President, to "review what scientific research has revealed over the past 50 years, and offer a forward-looking assessment of the range of scientific, technological, communication, and policy options for the future."  Registration is required.  More @ AAAS.


Organized by AAAS and the Carnegie Institution for Science,
with support from the American Meteorological Society
and the Linden Trust for Conservation

Posted by Oberlin College Science Library at 9:46 AM No comments:

Partial abstract:
[This] review discusses the advances made in understanding the essentiality and neurotoxicity of Manganese (Mn). We review occupational Mn-induced parkinsonism and the dynamic modes of Mn transport in biological systems, as well as the detection and pharmacokinetic modeling of Mn trafficking. In addition, we review some of the shared similarities, pathologic and clinical distinctions between Mn-induced parkinsonism and Parkinson's disease. Where possible, we review the influence of Mn toxicity on dopamine, gamma aminobutyric acid (GABA), and glutamate neurotransmitter levels and function. We conclude with a survey of the preventive and treatment strategies for manganism and idiopathic Parkinson's disease.

Published by MDPI, an open access publisher.
Posted by Alison Ricker at 2:00 PM No comments: 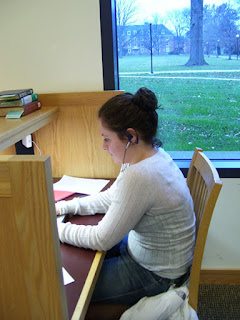 Study carrel sign-up is underway in the science library.  Complete your carrel request before 4pm on September 4 for the initial round of assigning carrels.

Declared science majors are given first consideration, but there are usually a good number of our 30 carrels that are assigned to others - everyone is welcome.

More information on the science library "About" page.
Posted by Alison Ricker at 3:26 PM No comments: