Cool & quiet in here, and plentiful summer reading. Check us out! 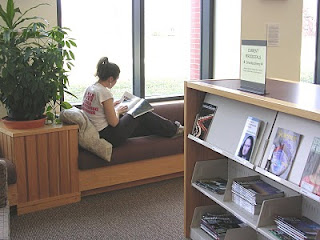 It never fails that we receive big shipments of marvelous new books just when there are so few people on campus to enjoy them.  And, with less competition for those great window seats, you have not only your pick of good reading but also a lovely, cool spot with a grand view of north campus and the tours of prospective students with family in tow.

Here are just a few titles to entice you to the new book shelf:
...and so many more!  See the entire list of books received in June and July.
Posted by Alison Ricker at 11:46 AM No comments:

NASA provides images on its web site of the Deep Horizon Oil Disaster, using data from multiple cameras of JPL's MISR instrument on NASA's Terra satellite. The images show the spread of oil into Louisiana’s fragile wetlands early in June. More recently, Florida Governor Charlie Crist released data and images from NOAA, showing the oil plume at 50 miles away from Panama City and 271 miles from St. Petersburg.  This satellite image shows the extent of the spill today, as reported on The Gov Monitor along with pollution monitoring data.

Follow the oil spill trajectory at with NOAA's GeoPlatform, a "new tool that provides near-real time information about the response effort."

Photos of animals caught in the slick are all-too readily found on the web.  AP Photos by Charlie Reidel are particularly troubling, as icons of the catastrophe.

Science magazine is covering "five key issues" of the oil spill, with clear analysis of the effects on fisheries and food, coastal ecosystems, life on the sea floor, marine life, and the fate of oil.
Posted by Alison Ricker at 2:47 PM No comments: