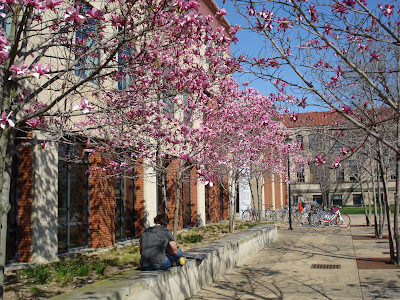 This was a spectacular day last week - in the midst of midterms, the warming sun and sweet fragrance under the magnolias improved outdoor studying immeasurably.

The blossoms fell fast in the days following, and now litter the pavement in front of the Science Center.  The fragrance lingers, however, to lessen disappointment on this overcast, chilly day.  Such is spring break in Oberlin.
Posted by Alison Ricker at 10:06 AM No comments:

Living on Earth featured a marvelous conversation this week with Bernie Klaus, trained musician who is now an "acoustic adventurer."  Listen to the miraculous sounds he has recorded, including a haunting symphony by two packs of wolves, the scraping of insects' wings and sap moving inside trees.  Remarkable!

We will order Great Animal Orchestra: Finding the Origins of Music in the World's Wild Places, by Klaus, just published this year.   Listen to other sounds from nature in the Borror Laboratory of Bioacoustics archive in the OhioLINK DMC. The Birds of North America also offers audio files, as does Grzimek's Animal Life.

Klaus remarked, toward the end of the Living on Earth segment, that "the sounds of the natural world are the sounds of the divine."  You may share that conviction after listening to his recordings.
Posted by Alison Ricker at 9:09 PM No comments:

Sherwood Rowland, CFCs, ozone depletion and the public role of scientists
RealClimate has posted a fine tribute to Nobel Prize Winner F. Sherwood Rowland, who died on March 10 at the age of 84 (obituary in Nature).  This observation of Dr. Rowland, following a lecture that prompted questions from an audience member with slight understanding of atmospheric science, is particularly telling:


"While everyone else was enjoying a beverage, cookies, and conversation, Sherry had been off in the corner for about 30 minutes talking with the questioner, explaining basic principles of atmospheric science, how the greenhouse effect works, etc. It didn’t matter that one of the two of them had a Nobel Prize while the other may not have had any formal education. What mattered to Sherry is that he had an opportunity to educate someone about this important issue, and that mattered more than anything."

I greatly appreciate this quote from Dr. Rowland, spoken during this Nobel Prize acceptance speech:

“What’s the use of having developed a science well enough to make predictions if, in the end, all we’re willing to do is stand around and wait for them to come true?”

Posted by Alison Ricker at 10:51 AM No comments:

The preponderance of new books in our last shipment are chemistry related, from Philosophy of Chemistry and The Chemical Element to Chemical Crystallography.  The last title includes highly specialized chapters by different contributors (e.g., "Construction and structure of metal-organic frameworks with specific ion-exchange property," by Man-Sheng Chen), while the first two are aimed at a broader audience.  The Chemical Element was published in conjunction with the International Year of Chemistry (2011) and relates directly to the UN Millennium Development Goals.  It demonstrates how the science of chemistry is essential for solving the most critical goals related to energy, climate, food, water, poverty, education and health.  It is accessible, important reading for anyone concerned about achieving a sustainable future for 10 billion or more people.  More new books.

Posted by Alison Ricker at 4:44 PM No comments: