Yet one more reason to thank industrious microbes

Improving some of the world's best chocolate by optimizing a microbial starter culture is sweet research, as reported in December 1,  2010 issue of Applied and Environmental Microbiology.  The article is nicely summarized on the ASM news site (Researchers Select Microbes to Improve Chocolate). Fine chocolate is most definitely the product of careful science and creative culinary art!

Food microbiology is well-represented in each issue of Applied and Environmental Microbiology.  For a general introduction, try Food microbiology / Martin R. Adams and Maurice O. Moss.  Royal Society of Chemistry, 2008.  Human diets were be very boring, indeed, without the myriad types of food we enjoy only through microbial action (not discounting the essential role of microbes in the gut!).
Posted by Alison Ricker at 9:44 AM No comments:

Good Luck on Exams! Check out a new book when it's all over...

Exam Day 1 is looming, and every table is occupied here in the science library - though some chairs are still free, if you're willing to share space at the big reading tables.  Good luck to everyone; may your short-term memory perform brilliantly and solidify into long-term knowledge.

More than a dozen new books were delivered today, which could entice you to explore a new subject once this semester's exams are behind you.  The potential disaster of a world without bees is explored in-depth by Allison Benjamin and Brian McCallum.  Nothing like the prospect of world famine due to the loss of these amazing pollinators to redirect your attention from whatever you are studying so madly at the moment.  There are, coincidentally, two more books focused on bees on the new book display right now: Why do bees buzz, and Honeybee democracy.  Check out all three and you could find yourself taking the first step toward apiculture!

There are plenty of other options, including a compilation of this year's best science and nature writing, so take a break and browse our display.
Posted by Alison Ricker at 5:08 PM No comments:

Alumna Felisa Wolfe ('00), now Wolfe-Simon, and her work on arsenophiles

MSNBC's Cosmic Log has been attentive to the research of Felisa Wolfe-Simon and her colleagues, and the response from other researchers to their provocative findings, published in Science, that a bacterium can utilize arsenic rather than phosphorus ['Weird life' researchers answer critics].  Before heading off to graduate school and her present position with the U.S. Geological Survey, she was Felisa Wolfe of the science library student staff!  A little known fact of her life at Oberlin, no doubt.  As a 2000 grad, Felisa was one of many science majors who lived through the upheaval of Science Center construction, without reaping any of the benefits  - we moved to the new science library in August 2001 and the rest of the center was completed the following year.  Felisa was also among the last group of students given the Metcalf Student Assistant award when that award was based strictly on merit, rather than longevity of employment.  She was one of the best, providing excellent service at our combination reference/circulation service desk.  It is always great to see scientific publications of former students, and especially exciting when novel research findings challenge long-held assumptions.
Posted by Alison Ricker at 12:23 PM No comments: 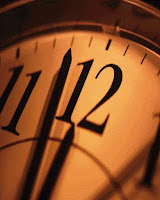 The Science Library has never offered so many hours on a weekend before.  To accommodate the exam schedule, we will stay open until midnight on Friday, and be open 8:30 am - midnight on Saturday and Sunday.  Come on in!  But leave your food outside, please.  More hours.
Posted by Alison Ricker at 3:40 PM No comments:

This is a disturbing development, perhaps indicative that the American public has difficulty focusing on long-term, complex problems in competition with WikiLeaks, tax cuts, the economy in general, and a lame duck legislative body focused on other issues.  Climate change waits for no lawmaker or policy wonk, however.  As one of the "most serious challenges facing us today" (Union of Concerned Scientists), media coverage needs to be accurate, thorough and accessible to all.

"At last year’s climate meeting in Copenhagen, the room was buzzing with thousands of reporters. However, today climate change seems to be a forgotten story. Democracy Now! reviewed the transcripts of last week’s evening news broadcasts on ABC, CBS and NBC in the United States. The Cancún talks were not mentioned a single time." (Democracy Now!, Dec. 6, 2010).

National Public Radio, however, provided good coverage of the talks on All Things Considered.  Thank you, NPR.

Roger Pielke, Jr. writes with clarity and insight about climate change policy in his new book, The Climate Fix. There are nearly 200 books on similar topics in the same section of shelving; it is an excellent place to learn the facts regarding climate and global warming.
Posted by Alison Ricker at 10:13 AM No comments: