Not Even Wrong. Peter Woit's view of superstring "theory"

From the book blurb: Wolfgang Pauli coined the phrase "not even wrong" to describe scientific theories or ideas that are "so incomplete that they could not even be used to make predictions to compare with observations to see whether they were wrong or not." Peter Woit, lecturer in the mathematics department of Columbia University, puts forth the view that superstring theory is such an idea, not a theory at all, because it offers no predictions and this "very lack of falsifiability is what has allowed the subject to survive and flourish."

Now on the new book shelf. Not Even Wrong.

Subject searches in OBIS on string models and superstring result in a number of relevant titles.
Posted by Alison Ricker at 3:54 PM No comments:

Dialogue, Not Diatribe: Collaboration in Science in Environment and BioScience 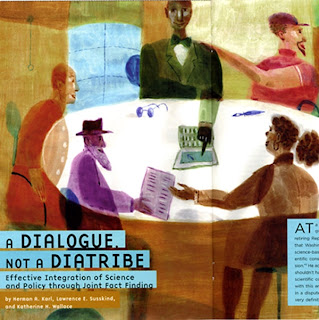 The January 2007 issues of Environment and BioScience, both on display in the science library, consider the essential need to dialogue in order to "advance cross-displinary research" (Eigenbrode, S.D., et al., BioScience 57(1): 55) and effectively integrate science and policy through "joint fact finding" (Karl, H.A., L.E. Susskind and K.H. Wallace, Environment 49(1): 20).

The critical need to refine communication among scientists in different disciplines and between scientists and policy makers, as well as scientists and the general public, and is further examined by AIBS President Douglas Futuyma in his editorial Science's Greatest Challenge (also in the January issue). Futuyma states, "The challenge that matters now is to make sure that science is taken seriously... can a pragmatic people not see that a scientific consensus is more trustworthy than the pronouncements of an industry-sponsored naysayer or a president untrained in biology or physics?" Toward this end, the AIBS will work with the National Academy of Sciences to make 2009 the "Year of Public Understanding of Science." 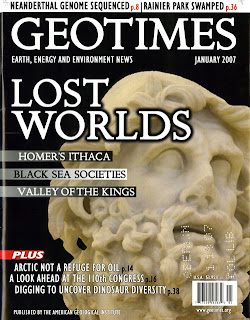 The January 2007 issues of Geotimes and Geology each feature icons of ancient civilizations on their covers. Odysseus, as memorialized in a museum located in the Villa of Tiberius, Sperlonga, Italy, draws the reader to the Geotimes report on "Finding Ithaca," the story of how geologists are helping to locate the possible real-world sites in Homer's epic poem Odyssey. 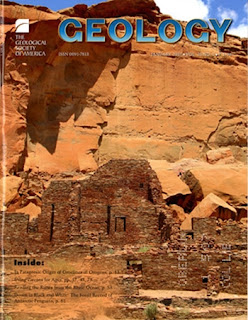 Geology pictures Pueblo Bonito, "the largest ruin at Chaco Canyon, New Mexico... The abandonment of dwellings by ancestral Americans, such as those at Chaco, may have been caused by sudden shifts in climate. Asmerom et al.* suggest that solar variability, via modulation of the tropical Pacific, may be the cause of Holocene climate change." Both journal issues are on the new journal display rack today.

"Per E. Andren and colleagues at Uppsala University and the Karolinska Institutet describe neuropeptidomics approaches in brain lysates and tissue section to study peptide expression in disease models and to identify potentially biological active neuropeptides."

The authors provide a helpful overview of neuropeptides (smallish proteins present throughout the nervous system) and the technology of visualizing and analyzing proteins with mass spectrometry. Wikipedia gives a handy definition of one of the techniques used by the researchers: MALDI MS.
Posted by Alison Ricker at 1:34 PM No comments: 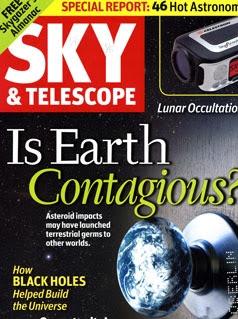 In the January issue of Sky & Telescope, now on the science library's current journals display, Selby Cull describes the hypothetical journey of a bacteria-laden rock hurtling from Earth through space, propelled by a mighty asteroid-earth collision on the scale of the Chicxulub impact.

Speculation that endospores from bacteria billions of years old might survive such a journey and successfully colonize inhospitable surfaces found on Europa, Titon and Mars is not so far-fetched, says Cull. Take a break from your Winter Term activities and check out this issue, which also considers how black holes helped build the universe and includes marvelous photographs from the land rovers on Mars, Opportunity and Spirit. Selby Cull, editorial intern for Sky & Telescope in the summer of 2006, wrote the text accompanying the "Martian photo opportunity" in addition to the story of bacteria launched by asteroid impact.
Posted by Alison Ricker at 4:09 PM No comments:

The Power of Plagues - on the new book shelf 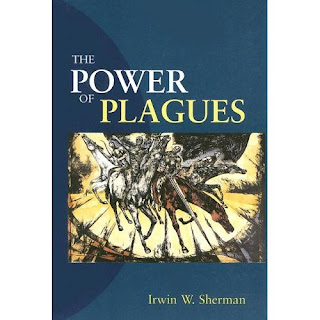 Dr. Greenberg notes that the strength of the book is the historical discussion of specific diseases, and that it should appeal to a "broad lay audience" as well as graduate students and advanced undergraduates in biology. Related works in the college library:

Posted by Alison Ricker at 8:52 PM No comments: