And the Winners Are... Globie Awards Announced by Environmental Defense

We're pleased to announce the winners of the first-ever Global Warming Globie Awards.

Based on the votes from more than 20,000 online supporters, we've chosen the best and worst global warming performances - from public officials to corporate leaders.

Their actions in recent years - from promoting solutions to obstructing real action - got them nominated. But your votes determined the winners.

Seattle Mayor Greg Nickels narrowly edged ahead of California governor Arnold Schwarzenegger by fewer than 30 votes, for spearheading a national effort to organize America's cities to cut carbon dioxide pollution 7% below 1990 levels by 2012. The "U.S. Mayors' Climate Protection Agreement" has been signed by 393 mayors representing over 57 million Americans.

View the rest of the winners.
Posted by Alison Ricker at 1:58 PM No comments:

Wikipedia: Knowledge to the People. An Interview With the Founder. 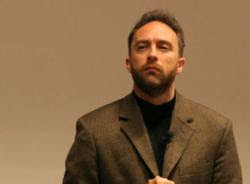 New Scientist, February 3-9, 2007 (vol. 193, no. 2589) features an interview with Jimmy "Jimbo" Wales, founder of Wikipedia. It offers insight into the amazing growth and popularity of this collaborative enterprise, and touches on plans for the search engine [search.wikia.com].

This issue of New Scientist is now on display with other journals received this week. The exclusive interview may be read online at newscientist.com.

newscientist.com also offers the Readers Q & A with Wikipedia founder.

image: from newscientist.com; Jimbo Wales during the interview.
Posted by Alison Ricker at 10:00 AM No comments: 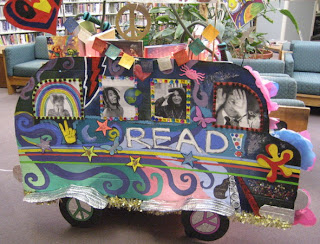 One of the winners of the Pimp Your Book Cart contest, @ Overdue Media, creators of the Unshelved comic strip.
This may seem far afield from science - but creativity is a huge part of any scientific endeavor (see C.M. Hall's essay on science and poetry on the wall across from the chemistry office), and these "pimped" book carts are nothing if not testimony to creativity, innovation, and technical expertise. So enjoy!

See all the winners and notable entries.

Feel inspired? Start planning now for next year's contest! We have a big red book cart that could definitely use a bit of imagination.
Posted by Alison Ricker at 11:23 AM No comments:

"At Science.gov, a single query can be launched across more than 50 million pages of government-sponsored science information and research results. Science.gov allows users to search the surface Web as well as the deep Web, where traditional search engines typically cannot go. The information is free and no registration is required.

"Hosted by the DOE Office of Scientific and Technical Information (OSTI) Science.gov is the gateway to reliable science and technology information from 16 organizations within 12 federal science agencies."
Posted by Alison Ricker at 9:27 PM No comments: 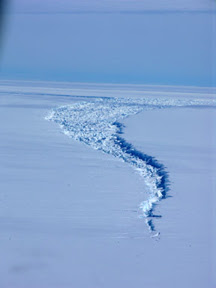 From NPR.org Morning Edition:
"Researchers have discovered vast lakes under the ice in Antarctica, a find that could help scientists understand the rapid and currently unpredictable behavior of huge moving glaciers — called ice streams — that can influence global sea levels."

Helen Fricker, Scripps Institution of Oceangraphy, and her colleagues report in an article soon to be published in Science that more than 145 underground lakes have been documented in Antarctica. Water in these lakes is moving rapidly from one lake to another and even out to sea, accelerating the flow of glaciers on the surface. Glaciers breaking off the continent into the Antarctic Ocean cause global increases in sea level. [listen to the story on Morning Edition]

Image from Scripps Institution of Oceanography. Read the accompanying story on rifts in glaciers.
Posted by Alison Ricker at 4:57 PM No comments:

Snow Closing Update: The college remains closed through Wednesday, with the exception of essential services for student dining, safety & security, the heating plant, etc. See Oberlin Oncampus for more info. Reserve materials due on Tuesday or Wednesday will not result in overdue fines if returned by 10 a.m. on Thursday. Questions? Email Alison Ricker or IM alisonricker (Yahoo or AOL). Thank you!

More snow art from Calvin. The "The Boogarious Baffoon" - by Bill Watterson.
Posted by Alison Ricker at 9:31 PM No comments:

Due to the severe weather now and predicted to continue this evening, the college is closed. See the campus alert on Oberlin Oncampus. Reserve materials checked out this afternoon with due times after 2:30 p.m. may be kept overnight and returned to the library on Wednesday, February 14 - assuming we will be open for business by then!

Forget the red carpet - we're rolling out the green and announcing our first ever global warming Globie Awards.

Our nominees embody the best and worst performances in the fight against global warming.

And best of all, you get to choose who wins! Vote here.

Winners will be announced the Friday before the Oscars. 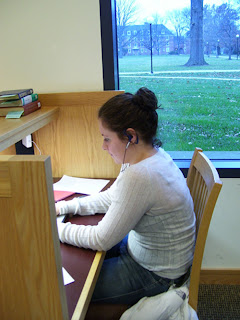 Want a corner of the science library that's all yours? Sign up for a study carrel. Study carrel application

We have 30 carrels, where you are welcome to leave checked out books, papers, and other materials needed for research and study. No food, please, and beverages are allowed only in certain types of containers. Food & Drink policy.

Study carrels will be assigned February 12, after 3:30 p.m.
Posted by Alison Ricker at 2:40 PM No comments: 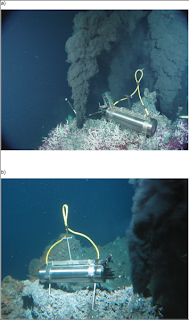 As reported by Timothy J. Crone and associates in PLoSOne, deep-sea hydrothermal vents produce a variety of sounds. Their recordings are "the first unambiguous field recordings showing that these vents radiate significant acoustic energy."

"Hydrothermal flow through seafloor black smoker vents is typically turbulent and vigorous, with speeds often exceeding 1 m/s. Although theory predicts that these flows will generate sound, the prevailing view has been that black smokers are essentially silent. The sounds contain a broadband component and narrowband tones which are indicative of resonance."

Posted by Alison Ricker at 3:35 PM No comments:

From Science news this week, by Michael Balter

This week, a research team presented new data in the Proceedings of the National Academy of Sciences that it says support the contention that a diminutive, small-brained hominid found on the Indonesian island of Flores truly represents a new species.

Read the news summary at www.sciencemag.org.

Posted by Alison Ricker at 2:34 PM No comments:

The nation’s leading environmental groups released the annual “Green Budget” for fiscal year 2008, calling on Congress and the president to restore adequate funding to protect public health and natural resources for the American people. Last year, the Bush administration tried to cut environmental spending by $4.3 billion -- 13 percent below FY 2006 levels.

Posted by Alison Ricker at 1:45 PM No comments: