Larry Squire '63 on NPR: Memory, the Hippocampus and Alzheimer's

"What we found was that the hippocampus was most active when subjects were recalling memories about new events that occurred just a year or two earlier," Squire says. "The hippocampus became less active as subjects recalled memories that were five years or 10 years old."

As people tried to remember older events, the scientists saw more and more activity on the surface of the brain.

The results suggest that the hippocampus is necessary to form new memories and to retrieve recent memories, says Russell Poldrack, a brain scientist at UCLA. But it plays little or no role once memories are a few years old.

"This is the clearest demonstration yet of what happens as memories get older," Poldrack says. "It's pretty compelling evidence." [more]

Related reading in the library:
The library is grateful to Dr. Squire for his many contributions to the collection, including his most recent monograph co-authored with Eric R. Kandel, Memory: from mind to molecules.

See other books in OBIS authored by Larry Squire.
Posted by Alison Ricker at 9:32 AM No comments:

Eat Right, Save the Planet: Bittman on NPR 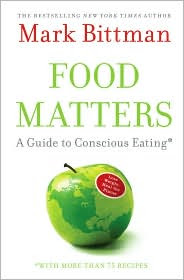 Hear NPR's interview with Mark Bittman, author of Food matters: a guide to conscious eating. Mark Bittman is a food columnist for The New York Times and an advocate for '"conscious eating." Bittman's book is an obvious choice after reading Michael Pollan's The omnivore's dilemma and In defense of food.

All copies of Mark Bittman's book in OhioLINK are currently checked out, and Oberlin's copy already has two holds. Read an excerpt at NPR, and place a hold on Oberlin's copy if desired.

From the synopsis @ Barnes & Noble: "The simple truth, as he points out, is that as long as you eat more vegetables and whole grains, the result will be better health for you and for the world in which we live."
Posted by Alison Ricker at 12:12 PM No comments:

What You Need to Know About Energy, from Natl Acad Press

The National Academies Press invites you to download and read, for free, more than 4,000 books! One of their newest offerings is What You Need to Know About Energy.

Listen also to the podcast America's Energy Future and link to related resources from the NAP web site. Browse books by topic or search specific keywords. Free PDF books will have a "sign in" link in the "purchase options" box. Click on the link, complete a short survey, and you will be able to download the book.
Posted by Alison Ricker at 3:34 PM No comments:

2009 is the Year of Science! Celebrating How We Know What We Know

The Coalition on the Public Understanding of Science (COPUS) kicked off Year of Science 2009 (YoS2009) -- a national, yearlong, grassroots celebration--this week in Boston at the annual meeting of the Society for Integrative and Comparative Biology. COPUS, which represents more than 500 organizations, is celebrating how science works, who scientists are, and why science matters. Ira Flatow, host of Science Friday, broadcast every week on National Public Radio, launched the week’s events.

One of the themes for January 2009 is Communicating Science. The library is over-flowing with wonderful books that do just that - engaging and enlightening, books by scientists and science writers for the general public are regularly featured on our new books shelf.

Start with the annual series "Best American Science and Nature Writing" for a sample of excellent articles. The 2008 volume is now on the new book shelf.
Posted by Alison Ricker at 3:35 PM No comments:

Think you're smart? Plenty of other animals are also adept at complex thinking.

Scientific American Mind features the intelligence of animals in a Dec. 2008 article by Paul Patton:

One World, Many Minds: Intelligence in the Animal Kingdom

From the introduction: "complex brains and sophisticated cognition have arisen multiple times in independent lineages of animals during the earth’s evolutionary history. So-called lower animals, such as fish, reptiles and birds, display a startling array of cognitive capabilities. Goldfish, for instance, have shown they can negotiate watery mazes similar to the way rats do in intelligence tests in the lab."

Read the whole story at Scientific American Mind. While you're there, check out some of the latest stories, including "Did a Comet Hit Earth 12,000 Years Ago?", posted Jan. 2.
Posted by Alison Ricker at 9:35 AM No comments: