Have You Read Dot Earth Today?

The New York Times offers Dot Earth - A blog about climate change, the environment and sustainability.

Revkin compares the Kyoto Protocol (due for renewal in 2012) with a cap-and-trade strategy embodied in the International Carbon Action Partnership.

Read more at the NYT blog and in Nature's Climate Blog. Considering the press release of the Nobel prize committee, the more attention to and positive action given to these issues, the better!

The following observation is from the Nobel press release:

"By awarding the Nobel Peace Prize for 2007 to the IPCC and Al Gore, the Norwegian Nobel Committee is seeking to contribute to a sharper focus on the processes and decisions that appear to be necessary to protect the world’s future climate, and thereby to reduce the threat to the security of mankind. Action is necessary now, before climate change moves beyond man’s control." nobelprize.org/nobel_prizes/peace/laureates/2007/press.html
Posted by Alison Ricker at 12:11 AM No comments:

How to bury the problem: carbon capture & storage

From the Royal Society of Chemistry's Chemistry World, October.

"Carbon capture and storage (CCS) could allow us to burn fossil fuels without climate consequences - but only with more investment in R&D, argues Stuart Haszeldine.

"CCS is a suite of technical and chemical processes which allow CO2 to be separated, liquefied under pressure, and then transported by pipe for storage in porous geological rock formations, deeper than 800 metres beneath the seabed. Suitable geological sites may be depleted oil or gas fields, or salt water aquifers not already used for other purposes.

"CCS can directly reduce CO2 emissions, enabling industrialised countries to continue using coal and gas for electricity generation while still meeting targets of 60 to 80 per cent reductions in CO2 emissions from power generation by 2050."

While you're at the RSC publications site, check out their other news magazines, which "provide a snapshot" of the latest findings in chemistry:

Posted by Alison Ricker at 11:34 AM No comments:

The State of Science in America 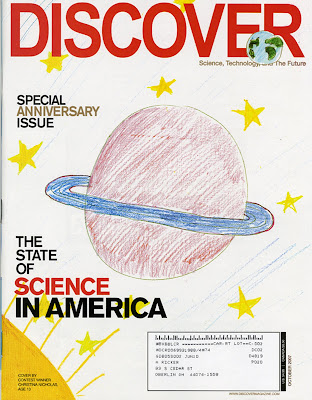 Disover's Oct. 2007 issue is a special anniversary issue reviewing the current state of science in America. The future is not entirely rosy, though there is enough promise to motivate even a resigned pessimist in the endeavor of educating tomorrow's scientists. From The Edge of Medicine to hypersonic missiles (Defense Department research), NASA's intelligent flight control system, and an encouraging interview with Education Secretary Margaret Spellings, Discover's writers cover a lot of ground. A worrisome essay is Jennifer Washburn's Science Under Siege, which identifies the biggest threat to science as the decline of government support and the growing dominance of private spending over American research. Stop by the library and read the whole issue.

Art work by middle-school students enhances the entire issue, and their aspirations for learning math and science are a pleasure to read.
Posted by Alison Ricker at 5:58 PM No comments:

The Dirty Truth About Coal 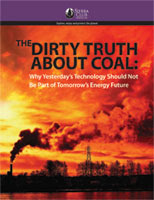 The Oberlin City Council voted on October 1 to pass an ordinance which approves a purchase contract with American Municipal Power-Ohio (AMP Ohio), investing in the proposed 1,000-megawatt pulverized coal burning power plant in Meigs County (southeast Ohio). The proposed coal plant, known as the AMP Generating Station (AMPGS) is one of 138 coal plant projects being tracked by The Sierra Club and Natural Resources Defense Council.

A new report by The Sierra Club provides more information: The Dirty Truth About Coal. It's concluding chapter is "Clean Coal," or America's Lead Energy Misnomer.

A more in-depth look at the coal industry is found in Big Coal, by Jeff Goodell. The Science Library's copy is checked out right now, but you can borrow it through OhioLINK.

Elise Young, a resident of southeast Ohio, shared with City Council some experiences of life in this region, which may eventually become home to 9 coal power plants within a 10-mile radius. Listen to Ms. Young at Coal Stories.

Posted by Alison Ricker at 12:34 PM No comments: