Dancing is not so uniquely human, apparently. Check out the YouTube video of a sulfur-crested cockatoo named Snowball dancing to the Backstreet Boys. More than a pet trick, neurobiologist Aniruddh Patel explains the significance for understanding how the brain processes music. Tecumseh Fitch, an evolutionary biologist at the University of St. Andrews in Scotland, suggests that the findings open the way for new research on the origins of music. He asks the question, "what genes are turned on while a bird is dancing?" Read more (and see the video) at NPR.
Posted by Alison Ricker at 11:24 PM No comments:

Today's shipment of new books brought our first book in the relatively new LC class of QV. Pharmacology and drug development, as a quickly burgeoning field, now has it own Library of Congress classification.

For now, Strategies for organic drug synthesis and design by Daniel Lednicer, is our only 'QV'. I'm sure this seems like a very modest development to those of you who don't manage libraries, but it caused me to take notice as we unpacked the new books! Now I'm looking forward to receiving books in the other new call number sequences at the end of the Qs:
QU Biochemistry
QW-QX Microbiology, Immunology, Parasites
QY-QZ Pathology, Clinical pathology

All of these topics were formerly lumped into QR (or with chemistry in QD) or with medicine (R, RM), so the additional LC class assignments will make browsing the entire collection of immunology books, for example, a bit more complicated in the future. But it should do a very nice job of bringing together newer materials in the interdisciplinary subject of biochemistry.

This development is minor compared to the leap from Dewey Decimal to Library of Congress classification back in 1974. Ah, change! Information and library management is all about change, as human knowledge expands and scholarly communication evolves.

President Barack Obama spoke to members of the National Academy of Sciences this morning during the Academy’s 146th annual meeting, announcing historic investments in science. You can read the transcript of his speech here. Audio recording is on the NAS Web site, along with video recording and photos.

Early in his speech, Pres. Obama targeted the swine flu outbreak, saying: "our capacity to deal with a public health challenge of this sort rests heavily on the work of our scientific and medical community. And this is one more example of why we cannot allow our nation to fall behind."

The President then made this commitment: "I am here today to set this goal: we will devote more than three percent of our GDP to research and development. We will not just meet, but we will exceed the level achieved at the height of the Space Race, through policies that invest in basic and applied research, create new incentives for private innovation, promote breakthroughs in energy and medicine, and improve education in math and science. This represents the largest commitment to scientific research and innovation in American history."
Posted by Alison Ricker at 11:19 AM No comments:

Can science-turned-art be turned back into science? The Gonzo Scientist asks readers to view the final outcome of the 2009 AAAS/Science Dance Contest and see if they can figure out which dance was based on which scientific research article. See the videos, take the challenge.

How will you celebrate Earth Day?

I finally remembered to turn the calendar above my desk to April, and was rewarded by National Wildlife Federation's photo of two squirrels poking their heads out of a tree hole barely big enough for one, let alone two. The little fella on the left is definitely feeling squished. This quote from John Muir greeted me as well: "When one tugs at a single thing in nature, he finds it attached to the rest of the world." Since google just found about 20,300 occurrences of this phrase, I'm obviously coming late to this Muir quote. No matter, it still resonates. How to celebrate and protect these immutable connections as Earth Day approaches?

On April 22 keep in mind at least that your day-to-day survival is completely dependent on circumstances far too numerous to list. We aim for independence while ignoring the balance required to maintain the charade. You are here because there are plankton in the ocean, worms in the soil, bees in the pollen, and clouds in the air. Gravity, star dust, oxygen and carbon, caribou, mushrooms, dung beetles and water... all connected, contributing, making the whole so much more than the sum of the parts.

We, you, us - the people - are in the thick of it, of course. Not above, aside, or apart, but a part. We can be the part that works to the keep the whole together, or the part that tears it asunder. April 22, 2009 - the 39th Anniversay of Earth Day - is a good day to strive for the former.

Join the Countdown to the 40th Anniversary, and be part of the Green Generation.
Posted by Alison Ricker at 2:33 PM No comments:

The Environmental Protection Agency has issued a proposed finding that six greenhouse gases contribute to air pollution that can threaten public health — a first step toward regulation. Read the story by Jeff Brady.

Posted by Alison Ricker at 4:41 PM No comments: 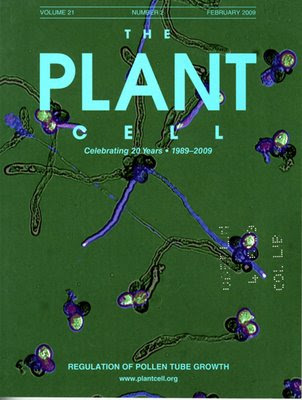 The February 2009 issue of Plant Cell includes an article by Oberlin alumna Laura Russo, '08 and Pablo Jenik, formerly of the Biology Department. Their article, co-authored with researchers at Univ. of Wisconsin, reports results of research undertaken at Oberlin. Congratulations to them both. Professor Jenik is now with the Biology Department of Franklin and Marshall College.

Tell Congress not to sacrifice our forests as "bio-energy"

From the NRDC (Natural Resources Defense Council):
"Right now Congress is considering legislation to increase the amount of electricity production from renewable sources like wind, solar and "biomass" -- organic matter that can come from sustainable sources, but could also come from natural forests and grasslands. Biomass can be an important part of the solution, but we need strong safeguards to ensure that it comes from sustainable crops and does not involve destroying forest habitats or turning them into cropland and sterile tree plantations." Take action.

Related 2009 hearing before the United States Senate Committee on Agriculture, Nutrition and Forestry.

More resources in the library's catalog on biomass for fuel and energy.
Posted by Alison Ricker at 10:36 AM No comments:

How much energy is sucked up by the charger while your phone is not even charging? How many watts is your computer chugging down while in sleep mode? How about that MP3 charger, languishing in the wall outlet?

There are 14 Kill-a-Watts in both Main and the Science libraries. Provide the name of your dorm when checking out the device, and your dorm earns points in the Ecolympics competition. The loan period is 4 days. First come, first served.

Walk around the corner toward the north entrance to the Science Center Commons and you'll find a display of softly glowing globes, illustrating current energy consumption in each dorm. At this moment, Barrows and Harkness are both a lovely shade of green (good!) while Price and Bailey are glowing red (not so energy efficient).

Kill-A-Watt devices are offered for sale over the internet (possibly locally, too; try Watson's). Search google and there are plenty of options. iKitchen.com has a good price.
Posted by Alison Ricker at 1:28 PM No comments:

Gil Nathanson from the University of Wisconsin, Madison will be speaking on Dirty Droplets in the Atmosphere: A Microscopic View of Gas-Liquid Reactions? Science Center, Room A255. Reception will be in the Love Lounge at 4:30pm.

Recent books on atmospheric chemistry are on display in the library's front window, along with a list of Dr. Nathason's recent publications. Three of the most recent indexed in Science Citation Index are listed here, and can all be accessed at the American Chemical Society Publications web site:

Posted by Alison Ricker at 2:07 PM No comments: