A Bit of Chemistry for Christmas

Thanks to a posting in Stephanie Bianchi's Sci-Tech Library Newsletter (National Science Foundation).

If you weary of the traditional, try caroling with song lyrics by chemists and physicists:

Posted by Alison Ricker at 4:06 PM No comments: 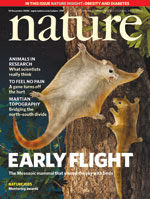 From the current issue of Nature:

"Distant relatives of today's flying squirrels probably existed at least 135 million years ago; much earlier than anyone had suspected. That is the conclusion of a team of researchers led by Jin Meng, who have found the fossilized remains of a new species of mammal" (see Nature 14 December, p. 889).

Read the story behind the discovery of this ancient glider in inner Mongolia.
Posted by Alison Ricker at 9:32 AM No comments:

Undermining Science... in the Bush Administration 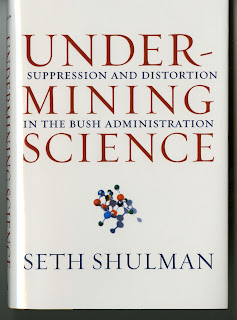 Seth Shulman's book on the "suppression and distortion" of science in the (G. W. ) Bush administration is now on the new book shelf. The first quotation in the book comes from an editorial in Scientific American:

"It is increasingly impossible to ignore that this White House disdains research that inconveniences it."

More documentation of the misrepresentation of scientific data and research findings is available from the Union of Concerned Scientists and Bush Greenwatch.

Posted by Alison Ricker at 5:44 PM No comments:

"When researchers from Yale University reported last year that they'd used a laser to activate neurons in fruit flies and in turn control the insects' behavior, even Jay Leno thought it was cool. In a skit, the Tonight Show host pretended to use a remote-controlled fly to harass President George W. Bush during a speech. "I thought it was actually quite funny," says Gero Miesenböck, the neuroscientist who led the study. A video clip of Leno's skit elicited chuckles when Miesenböck played it during a presentation at October's meeting of the Society for Neuroscience in Atlanta, Georgia." [more from Science]

To read abstracts from the Mini Symposium on Optogenetics at the Society for Neurocience, October 2006, go to the Society's annual meeting website http://www.sfn.org/am2006/, select the neuroscience meeting planner, then search for Miesenbock as author in the advanced search.
Posted by Alison Ricker at 4:23 PM No comments: 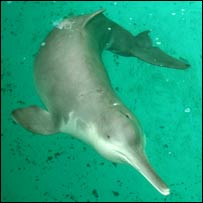 The Chinese River Dolphin, or Baiji (Lipotes vexillifer), found only in the Yangtze River, was declared "functionally extinct" after a 6-week expedition failed to find even one dolphin still living in the river. The Three Gorges Dam project, pollution and over hunting were cited as causes for extinction, giving the Baiji the unwelcome designation as the first large aquatic mammal driven to extinction by human activity since the 1950s.

Learn more about the Baiji's biology and conservation attempts in Conservation Biology, vol. 20, no. 3 June 2006, on the OhioLINK Electronic Journal Center.
image from the BBC.
Posted by Alison Ricker at 10:28 PM No comments:

Evolution, Creationism and Intelligent Design: news from Nature, Science, and a book by Michael Shermer 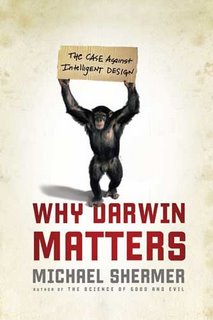 Why Darwin Matters: the Case Against Intelligent Design, by Michael Shermer, just arrived in the science library, nicely provides in depth context for recent items in Nature and Science:

image from the publisher's Web site, Henry Holt and Co., Times Books.
Posted by Alison Ricker at 3:51 PM No comments:

On the New Book Shelf: Voices from Chernobyl 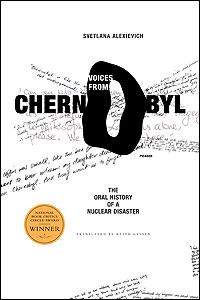 Among the new books received today is the winner of the National Book Critics Circle Award, Voices from Chernobyl: an Oral History of a Nuclear Disaster by Svetlana Alexievich. Read excerpts from the book at NPR.org - part of a twenty-year retrospective on the explosion of a nuclear reactor at the Chernobyl nuclear plant in northern Ukraine.

Posted by Alison Ricker at 1:29 PM No comments:

From Science news of the week
by Eli Kintisch
A new U.S. government analysis has found that the plutonium at the heart of the country's nearly 10,000 stockpiled nuclear weapons could last twice as long as previously thought. That conclusion is likely to escalate the debate over the Bush Administration's campaign to build a new generation of weapons. (Read more.)

Posted by Alison Ricker at 11:45 AM No comments:

Join the activities in the Adam Joseph Lewis Environmental Center today and celebrate the college's commitment to develop a plan for becoming climate neutral. See the Oberlin events calendar for details, including:

The art installation will reveal what became of all those incandescent light bulbs replaced with energy efficient compact fluorescent bulbs campus-wide (including bulbs at the science library reading tables).

[More info on Oberlin's climate neutrality pledge from the Oberlin Review.]
Posted by Alison Ricker at 5:26 AM No comments:

Environmental Defense invites you to join the Holiday Song Challenge, and create a video of you and your friends singing a holiday song with a global warming theme. View their staff video for inspiration, or other entries on the YouTube Holiday Song Challenge group, then submit your own production to YouTube.

While you're at the Environmental Defense site, take time to read their Five Big Ideas for the Environment for 2007.
Posted by Alison Ricker at 2:15 PM No comments:

Listen to ScienceFriday for Dec. 1, as host Ira Flatow reviews with guests the arguments presented last week to the Supreme Court, in its first case ever to deal with global warming.

From ScienceFriday.com: "How might the court's ruling might affect what we drive in the future? We'll also take a look at the upcoming session of Congress. With Democrats poised to take over leadership of both houses of Congress next month, how will the new Congress tackle the issue of climate change?" Listen to the broadcast.

More on this case is posted on the Natural Resources Defense Council web site, with frequently updated links to numerous news sources.
Posted by Alison Ricker at 3:40 PM No comments: