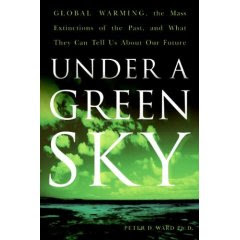 Along with numerous other eye-catching titles on the new book shelf (come by and browse!), we have Peter Ward's latest monograph on mass extinction:

Under a Green Sky - Global Warming, Mass Extinctions of the Past and What They Can Tell Us About the Future.

Here is a snippet from the Booklist review:
"Paleontologist and science writer Ward combines tales of his own punishing fieldwork with a piquant history of the controversies that have dogged scientists seeking the cause of the "mother of all extinctions" in the Permian period. This provides the foundation for a stunning discovery: evidence of past greenhouse extinctions. As Ward carefully parses the data and its implications, he observes, 'the key to climate change seems to be both the level and the rate at which carbon dioxide rises in the atmosphere,' no matter its source."

The library owns several other books by Ward, equally useful for understanding the relationship between global climate and biodiversity.
Posted by Alison Ricker at 4:28 PM No comments:

Tuna: the Decline of a Once Vast Species

The Diane Rhem show for Wed. Feb. 13 featured a very lively conversation among host Diane Rehm and her guests:

Carl Safina, founder of the Blue Ocean Institute, adjunct professor at the School of Marine and Atmospheric Sciences at Stony Brook University, and author of "Voyage of the Sea Turtle," "Song for the Blue Ocean," and other books [search OhioLINK catalog by author].

Dr. Dariush Mozaffarian, cardiologist and epidemiologist at the Harvard School of Public Health.

Listen to the show for a compelling account of overfishing and pollution that has caused a collapse of the blue-fin tuna population in the western Atlantic, and will undoubtedly lead to extinction without intervention on an international scale.
Posted by Alison Ricker at 10:14 AM No comments:

Darwin Day Celebration is an "international recognition of science and humanity." On this 199th anniversary of Darwin's birth, take a few moments to marvel over the amazing interactions of genetics, habitat, adaptation, predation, mutation, and exploration that led, over millennia, to the satisfying specimen of biological achievement that is you.

We have a gazillion books and journal articles to help you learn more! Even a video or two.

Find genetics related videos from the OhioLINK Digital Video Collection by searching Genetics as a subject heading, limited to material type Videos. Genetics & Evolution, from Films for the Humanities & Sciences, summarizes the theory of natural selection and describes the process of trait inheritance.

Wonderful books about Charles Darwin await your reading pleasure in the library. Browse just a few of them now on display at the science library circulation desk, along with selected other titles on evolution, biological diversity, and genetics.

An online course on Evolution, Creationism, and the Nature of Science,

More: www.DarwinDay.org
Online Course: Evolution, Creationism and the Nature of Science
Posted by Alison Ricker at 9:52 AM No comments:

Thanks to our subscription through OhioLINK, we now have access to C&EN Online (Chemical & Engineering News, the magazine for American Chemical Society members). Our access includes the archive of issues from 1998 to the present, as well as the ACS 125th anniversary issue and the Jan. 12, 1998 issue celebrating 75 Years of C&EN.

The bottom left corner of C&EN's home page offers a number of special features, including C&EN blogs, Critter Chemistry, Green Chemistry, and Climate Change. The last three are collections of articles and news specific to those subjects. Enjoy reading this weekly news magazine from ACS.
Posted by Alison Ricker at 12:59 PM No comments:

The ISI Web of Science database, which includes Science Citation Index, has a completely new search interface. Check it out! Let us know what you think - leave a comment here or email science.library@oberlin.edu.
Posted by Alison Ricker at 3:10 PM No comments:

Across the Universe Day: Beatles' Song Beamed to Polaris

For the first time ever, NASA will beam a song -- The Beatles' Across the Universe -- directly into deep space at 7 p.m. EST on Feb.4.

The transmission over NASA's Deep Space Network will commemorate the 40th anniversary of the day The Beatles recorded the song, as well as the 50th anniversary of NASA's founding and the group's beginnings. Two other anniversaries also are being honored: The launch 50 years ago this week of Explorer 1, the first U.S. satellite, and the founding 45 years ago of the Deep Space Network, an international network of antennas that supports missions to explore the universe.

As part of the celebration, the public around the world has been invited to participate in the event by simultaneously playing the song at the same time it is transmitted by NASA. Many of the senior NASA scientists and engineers involved in the effort are among the group's biggest fans.

Read more.
Posted by Alison Ricker at 9:50 AM 2 comments: