Textbooks in the Science Library

Is your required science textbook on reserve in the Science Library? It's quite likely. We routinely look at the textbooks listed for science courses on the Oberlin College Bookstore website, and often decide to add the required textbook to the science library collection.

It is not guaranteed, however, and even if we do place the text on reserve your use is limited to 3 hours at a time and not for overnight use. So it does not take the place of owning your own book, with all of the benefits of being able to write in the margins, underline and highlight text to your heart's content, or read far into the night if necessary. We are just a bit more convenient than lugging around 1200+ pages of biochemistry (Voet and Voet is perhaps the heaviest text on reserve and one of the most popular for in-library reading).

Once you've found your textbook listed at the college bookstore, search OBIS and you'll see whether we own it and the course number for which it is reserved. Read all about reserve policies.
Posted by Alison Ricker at 12:02 PM No comments:

Competing ideas and accusations over health care reform are flying through the media and in town hall meetings across the country. Many of the recent articles on FactCheck.org address common misconceptions and expose false claims regarding different plans being considered by Congress. Help someone without internet access by reading through these articles and passing along accurate, nonpartisan information. Have a specific question that isn't addressed in an article? Pose your question directly on the web site.

Posted by Alison Ricker at 3:05 PM No comments:

The Benefit of Doubt for Decision Making in a Civil Society

Doubt is an important part of scientific inquiry, in part because it causes the investigator to consider different variables and conditions necessary to test a hypothesis and evaluate research results. Sociologist Peter Berger argues (with not a small amount of certainty) that doubt is just as necessary in civil discourse. Listen to a provocative interview between Berger and Diane Rhem on the second segment of today's Diane Rhem Show (National Public Radio on WAMU.org). Podcast or transcripts are available approximately one hour after the end of the show.

From the Web site: "Civil discourse today is in danger of being shouted down by talking heads and single-minded bloggers. How doubt can help people on opposite sides of an issue to disagree more agreeably." Peter Berger is a faculty member at Boston University and founder of Boston University's Institute of Culture, Religion, and World Affairs. His newest book: In Praise of Doubt: How to Have Convictions Without Becoming a Fanatic. A very timely message as we witness the distinctly un-civil discourse around Town Halls on health care reform.

Find other books by Peter Berger in the college library [this newest title is not yet ordered].
Posted by Alison Ricker at 12:05 PM 1 comment:

One Man's Search for Natural Silence in a Noisy World

"Silence is not the absence of something but the presence of everything." So says author Gordon Hempton, acoustic ecologist, in the prologue to his new book One Square Inch of Silence (now on the new book shelf). Hempton's early work for the book was considered by another author promoting stillness during the June 13, 2003 edition of Living on Earth. Richard Mahler, author of Stillness, pointed out that "clinical studies confirm that stillness may also lower stress and blood pressure while promoting a sense of happiness and well being." Yet silence is vanishing from our lives and from even the most pristine wilderness. Gordon Hempton warns that the "unchecked loss of silence 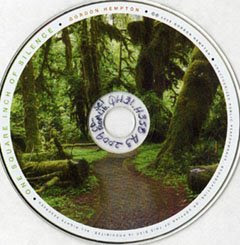 is a canary in a coal mine -- a global one. If we cannot make a stand here, if we turn a deaf ear to the issue of vanishing natural quiet, how can we expect to fare better with more complex environmental crises?"

A sound disc accompanies the book, so you can listen to the sounds of silence or the "silences of nature." I did, on one of the wonderful new Macs in our public computer area, which has remarkably good speakers. Twittering birds and crickets were clearly audible in the silence of a western preserve; then, the unmistakable rumble of distant traffic blurred the edge of birdsong. I suggest you try this without the distraction of multiple computers and the ever present hum of lights and the HVAC system in the science library - even in the middle of summer, without another soul in the library, it is not a peaceful silence.

Posted by Alison Ricker at 3:05 PM No comments: