Spring Break Hours (all 37 of them) 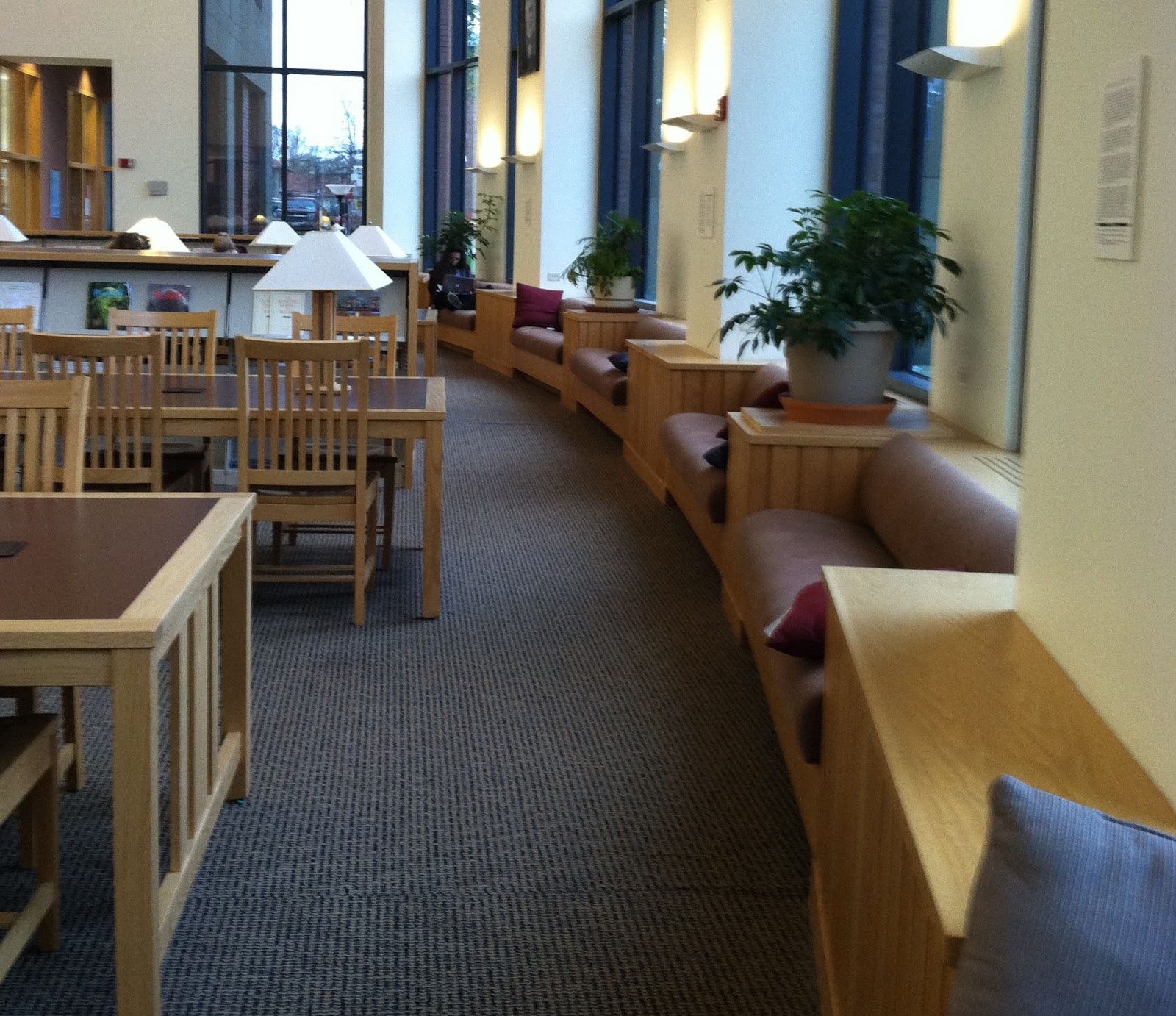 We are counting the hours until Spring Break - and wishing you all a blissfully restive (maybe a tad festive) and restorative week!  If you are on campus and would like a VERY quiet place to study, read, reflect on the gray skies and bare trees and long for warmer days, we'll be here!


If you manage to get somewhere with balmy weather and sunshine, bottle some for us.
Posted by Alison Ricker at 3:01 PM No comments:

What is a scientist to do?

Sandra Steingraber's powerful essay in the current issue of Orion Magazine questions the "Silence of Science" while remarking on the "eloquent activism of people of faith."  If you, as a scientist, understand the risks and potential hazards of, say, removing brine water from deep underground chambers in order to store highly toxic and flammable waste materials from hydraulic fracturing, are you obliged to make those risks known to the general public and policy makers?  Steingraber expresses her frustration:


"Even the scientists whose own research shows harm from drilling and fracking operations are hesitant to speak out. Some fear loss of grant money. Some believe their objectivity will be questioned—as though objectivity and neutrality were the same thing. Some are just so, so busy. And some believe fracking is inevitable. The result is political silence, a stunning position for physicians under oath and other medical professionals studying such things as cancer-causing chemicals."

She makes a strong case for the importance of educating others with well-researched data and supporting activists who need unbiased information.

The  Jan/Feb 2013 issue of Orion Magazine feature story by Paul Kingsnorth makes the provocative statement "Technology isn't going to save us, but neither is environmentalism."  Entitled Dark Ecology, his essay also comes to the point of individual responsibility:


"What does the near future look like? I’d put my bets on a strange and unworldly combination of ongoing collapse, which will continue to fragment both nature and culture, and a new wave of techno-green “solutions” being unveiled in a doomed attempt to prevent it... If you don’t like any of this, but you know you can’t stop it, where does it leave you? The answer is that it leaves you with an obligation to be honest about where you are in history’s great cycle, and what you have the power to do and what you don’t."

The entire issue is well-worth the reader's time and thoughtful consideration.
Posted by Alison Ricker at 5:34 PM No comments:

The science library has learned that Holden Lai and Molly MacInnes earned speaking awards at the Cleveland ACS Meeting-in-Miniature held Wednesday, March 13, 2013. Holden's research with Associate Professor of Chemistry Michael Nee on barrel-shaped cage molecules was described in his presentation, entitled "Towards the Synthesis of Water-Soluble Functionalized Cucurbit[8]uril." Molly's seminar, "New Organosulfonate Complexes from Commodity Chemicals for the Assembly of Microporous Frameworks," gave highlights from her honors project mentored by Jesse Rowsell, Assistant Professor of Chemistry. Prof. Rowsell reports that "these were just two of many excellent talks presented at John Carroll University by graduate and undergraduate students attending institutions in the Cleveland area."  Thanks for sending us this information!
Posted by Alison Ricker at 3:43 PM No comments:

Use OhioLINK to Find Call Numbers for OC Library Items

OBIS, our online catalog, needs a bit of new hardware and is not available today.  We miss OBIS, but you can find information about our library's holdings in the OhioLINK library catalog - along with the holdings of more than 90 other libraries in the state.  Don't hesitate to ask us for help!
Posted by Alison Ricker at 11:13 AM No comments:

Not only is this Women's History Month (have you seen the wonderful display we have up, on your way into the library?), but today is International Women's Day! The current issue of Nature has taken this opportunity to address the institutionalized sexism that exists in the natural sciences and to examine what can be done to close the gender gap. In light of recent events on the Oberlin campus, this is another arena in which we find social inequity, and it should be--and has been, this week--opened up for discussion.

Check out the featured articles in this special issue of Nature, come into the library to explore even more texts on women in science, and keep a dialogue of justice alive in the context of natural science, Oberlinians!
Posted by Anonymous at 3:07 PM No comments:

Another Triumph for the Great White!

It's the first day of March, and this month brings us great news from California: the Great White Shark (Carcharodon carcharias) is now officially protected under the California Endangered Species Act so that anyone who catches or otherwise harms these animals will be subject to prosecution under state law. It has been estimated that there are fewer than 350 great whites left in the west / northwest Pacific waters, and they are certainly in danger. Check out the California Department of Fish and Wildlife report for more information on this measure and to read up on white shark facts.

This is a critical time to address conservation issues in our oceans, and there's plenty more to learn about the risks that sharks are currently facing. Come into the science library to learn more by checking out one of the following titles:

Shark: in peril in the sea  -David Owen
Sharks of the open ocean: biology, fisheries, and conservation  -Camhi, Pikitch, Babcock


Posted by Anonymous at 3:04 PM No comments: